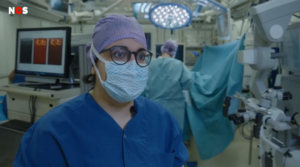 On April 22nd, Sadaf Soloukey was featured in a video-interview by NOS, the dutch national news. In a three minute video, shot during an awake craniotomy surgery in the OR of dr. Vincent, Sadaf explains the application of functional Ultrasound (fUS) in a neurosurgical setting. Not only would fUS allow for possible identification of tumors based on vascular strucuture, it also allows for a distinction between healthy functional and unhealthy tumor tissue, based on differences in vascular response during particular functional tasks performed by the patient.

Sadaf is a PhD student working on the clinical application of fUS as a part of CUBE.